John Conerly - A Look Inside GIS

A Look Inside GIS Senior Advisor 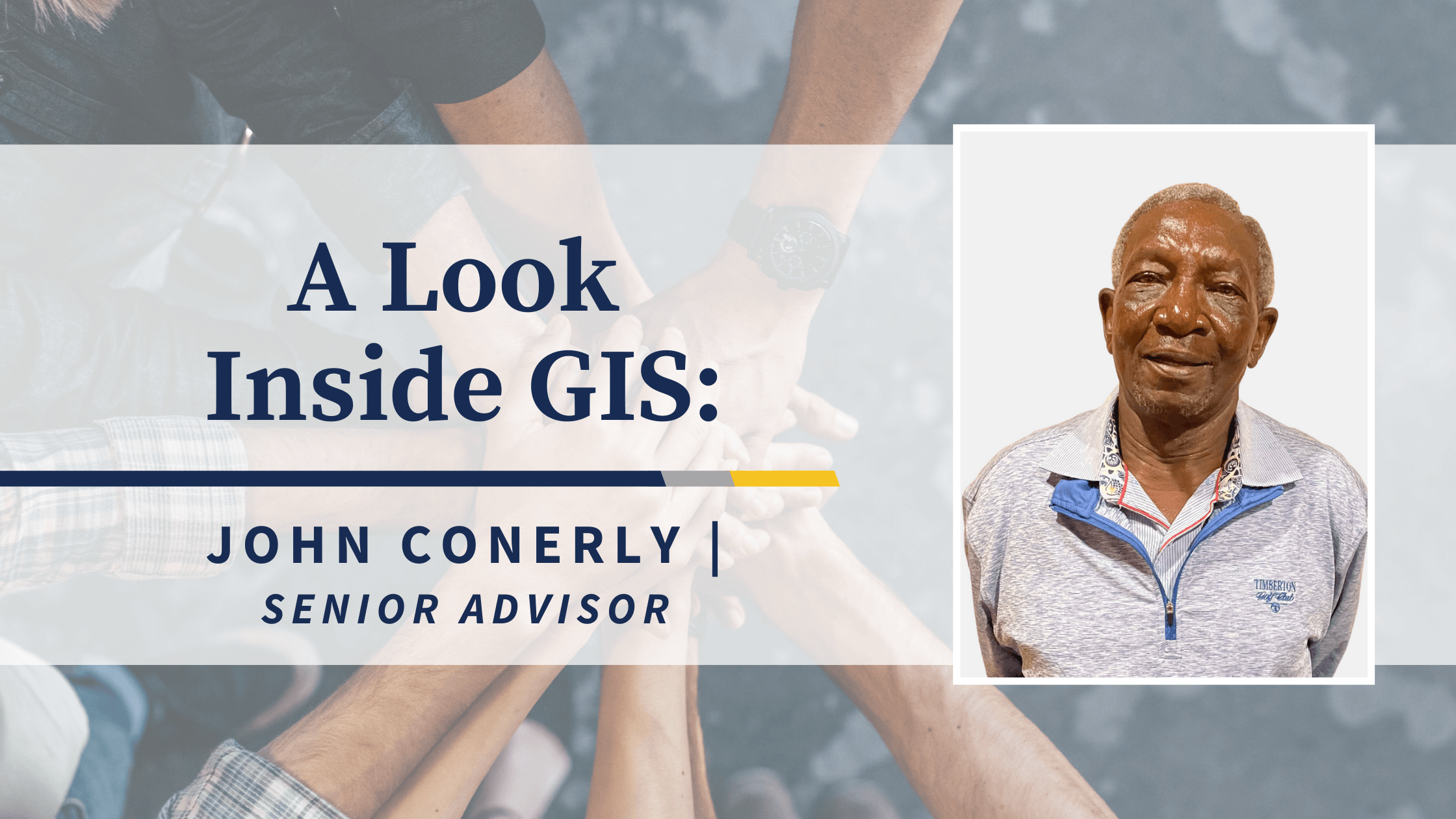 One of the most highly regarded individuals at GIS is Mr. John Conerly. His official title is Senior Advisor to the executive team, but this may well be better described as a mentor to all within the company. John started his career in the Oil and Gas industry decades before many of the current staff were considering their employment path. With 35 years previous employment with a major client as a Construction Manager, John’s vast experience was established across the Gulf of Mexico and Nigeria. GIS was one of his main contractors and made an unforgettable impression on him:

“I always had high regards for GIS because I could call them at midnight and get the president, and that always impressed me. It's an emergency for me, but why would he be up and answering my calls? His name was Clyde, who was the second generation of the Pregeants, the founding family of GIS. And that became my relationship with Clyde Pregeant. He and I became personal friends, a relationship which we maintain today in addition to developing a great partnership as client - supplier.

When I retired, I was returning back to Nigeria consulting for a major client for two years. Clyde came to me and said: ‘I don't want you going back over there anymore, I'm offering you a job’; that was in May of 2007, I will never forget it. I joined GIS for a few years, retired again but ended up being asked to join the team once more which I accepted as I recognized the opportunity to continue to contribute.

In this company, I am able to sit next door to the CEO every day. I like the way GIS treats people; they have good intentions. We now begin to understand the impact this makes on employees and begin to understand the importance in consistency in our behavior over time. You feel like you’re leaving a legacy. Overall, GIS is a very established organization with climbing the ladder as a premier company.”

As a Senior Advisor, John is one of four team members involved in leadership training and team building. He was instrumental in creating GIS’ behavior-based safety management system named L.I.F.E. John helps staff members work on their personal skills and mental attitude (mindset, skillset, and toolset) to help them develop within their roles.

“As we try to develop a culture of care here at GIS, we have formed two groups, one is the support services group, we call them REACT: Respect, Efficiency, Accountability, Communication and Trust. In addition, we have the Culture of Care team that was formed around commitment, compassion, and courage. What we are trying to do is get the right mindset. If we don't get the right mindset, then we won't effectively accomplishment our goals. Because recognizing that if we truly internalize those values, then everything else works.”

GIS continues to strive to better their organizational practices with these learnings in mind.

To Live, Love, Learn, and Leave a Legacy

John and his colleagues are certainly making an impact on the more than over two thousand employees at GIS. Their aim is to care and cultivate the staff they have, and ensure they perform and grow in line with the company. John is adamant that economics is not the only motivator for the working population. He believes that people will opt to work for an employer if they know they are treated well and feel cared for, stating “I don’t care how much you know, until I know how much you care." GIS’ staff has a very high percentage of long-term employees within their ranks.

Helping his colleagues and staff manage the inevitable change in the workplace is another of John’s responsibilities. With decades of experience in the Oil and Gas industry, John has seen and experienced his fair share of change. He knows, first-hand, that there is logic relating core principles to an ever-developing workplace.

“If you've been doing your job for 25 years the same way, you're probably doing it wrong because certainly it has evolved over time. And at the end of the day, there's only two reasons you don't change. You can't or you won't. We have got to recognize that the only constant today is change. And the rate of change has increased exponentially. I believe the true essence of change is an unchanging set of core principles and values. No matter what that change may be, principles don't change.

You can't change a principle for they ultimately are in control (gravity). What allows me the ability to change is an unfaltering set of core principles and values. And today you have to provide services that are fast, focused, flexible and friendly, or else, you're out of the business. We have continuously stayed on top of that."

“I think our competitive edge is recognizing, not just saying, that people are our greatest asset. We are continuing to transition to a culture of identifying the root cause. Our people are not the cause but, the start. If you want to improve the operating environment, it seems to me you would ask the people that perform the work for the answers.”

Valuing and taking care of any asset will only lead to its longevity and continued performance. John along with the REACT and Culture of Care groups are determined to ensure their words equal action on the ground. ‘Putting People First’ has been GIS’ motto for several years and with the concerted efforts of its dedicated team of trainers and mentors. The quest to develop personal, professional and leadership skills within their many departments will no doubt be another one of the company’s many success stories.

Vice President of Fabrication is Lee Bordelon Sr, one of GIS’ long-serving employees with more than twenty-eight years of service. His knowledge of...

One of the smallest, yet most impactful tools to transform our working lives has been the humble drone. This pint-sized ‘winged-worker,’ also known...

Brad Pregeant - A Look Inside GIS

Forty years ago, Brad Pregeant started his career in the family business as an apprentice Roustabout. Little did he know then that the company his...